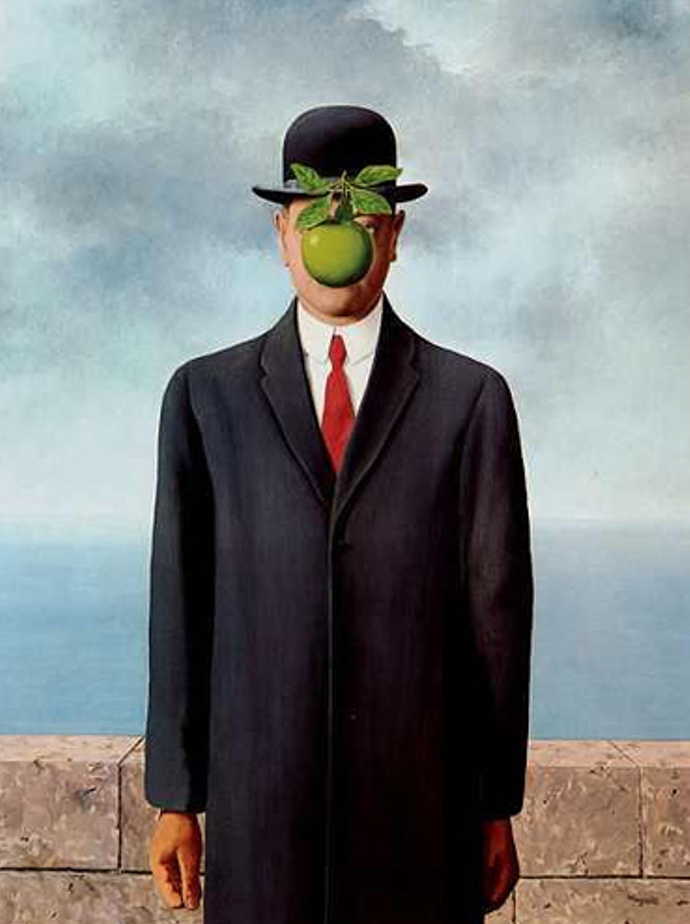 My daughter’s art teacher told her class a wonderful story.

They were scrutinising the painting ‘Son of Man’ by the Belgian surrealist, René Magritte.

Why a hovering green apple hiding Magritte’s face? Why do his eyes poke out just a little? Why the leaves on the apple?

Was it about how we only ever show part of our true selves, as Magritte himself hinted?

Perhaps a religious allegory, given the name of the painting? Or a commentary about nature and the circle of life?

But then, ever so quietly, the teacher dropped a bombshell.

Apparently there was another, less philosophical, reason why Magritte chose this approach.

(A range of his other works show faces obscured by birds and flowers.)

Ha! Now I really hope this is true.

I love the idea of Magritte sniggering at us from his grave, as we read deeper meaning into his ploy to avoid the pain of painting nostrils, eyelashes and irises.

But I also love the way that Magritte managed to work around what could have been a big stumbling block.

He didn’t let his dislike of painting faces stop him from producing thought provoking, original portraits that became world famous.

And I figure if Magritte can do it, you can too.

If you want to be more visible, don’t let your concerns about self-promotion stop you in your tracks.

Find your workaround. So if you…

… don’t know what to say on social media, start by commenting on other people’s posts until you find your own voice.

… want to do more public speaking, but hate the idea of a big audience, try presenting to your team as a first step.

… don’t like being the centre of attention, try bringing other people together instead with you as the facilitator.

It’s never all or nothing with personal branding or marketing.

No one way of doing things.

But often we let our aversion to certain aspects of it stop us from doing anything at all.

So we stay invisible.

And watch through narrowed eyes as other people get the attention, the respect, the clients and the promotions. Seethe.

So think about your version of a green apple to make self-promotion work for you.